Stitch A Star For Justice
2013
Collaborative sewing project
Photo: Aram Han
Stitch a Star for Justice explores the history of police torture in the city of Chicago. Between 1972 and 1991 over 100 African Americans experienced torture at the hands of Chicago police detectives on Chicago’s South Side. Members of the public were invited to sew a fifth star onto the city of Chicago flag, to raise awareness about the history of police torture, and generate discussion about racism and injustice. By sewing in public we were also drawing on histories of collective sewing and quilting bees. Stitch A Star for Justice took place at the Chicago Cultural Center and the SAIC Neiman Center in February 2013.

The project was initiated my Social Fabrics class in the Fiber & Material Studies department at the School of the Art Institute of Chicago, in collaboration with the Chicago Torture Justice Memorials Project (www.chicagotorture.org). It was inspired by
Carla Jean Mayer's Fifth Star Project, which proposes that a fifth star be added to the city of Chicago flag to commemorate the survivors of police torture in Chicago.

View the project archive at http://stitchastarforjustice.tumblr.com/
PREV / NEXT   34 / 61
BACK TO ART WORK 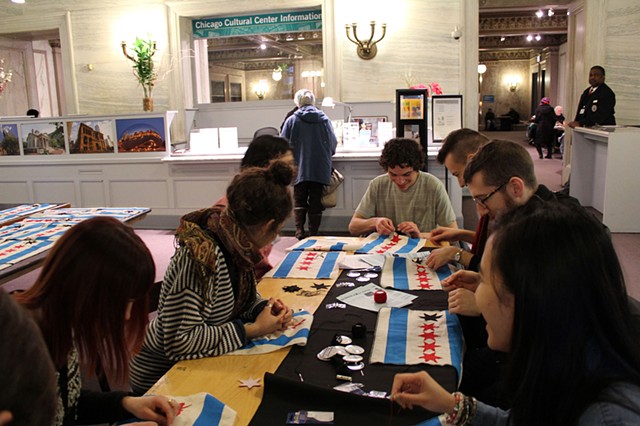