where are all the radical jews?
2011
Performance, Montreal, Quebec
Photos: Moe Murphy
Wearing a Yiddish-language sign that read, “Where are all the radical Jews?” I stood vigil outside sites of historical importance to the Montreal Jewish community at what I consider to be the height of its progressive politics, during the 1930s – 1950s. In 1943 working class Jews living in the Plateau Mont Royal district elected a Jewish Communist MP to the Canadian parliament – the first and only time in Canadian history that such an event occurred. This photo was taken outside the former offices of the Keneder Adler, a progressive Yiddish-language newspaper published between 1907 and 1988.

This work is a personal commentary on a marked shift toward more conservative politics by a growing number of Montreal Jews.
PREV / NEXT   41 / 61
BACK TO ART WORK 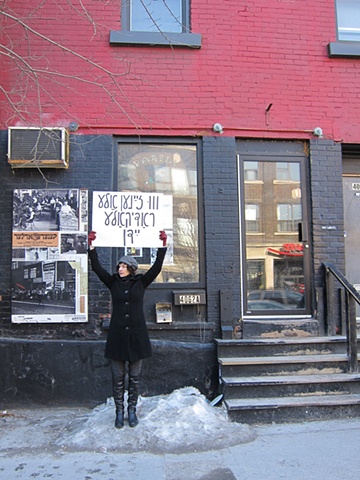